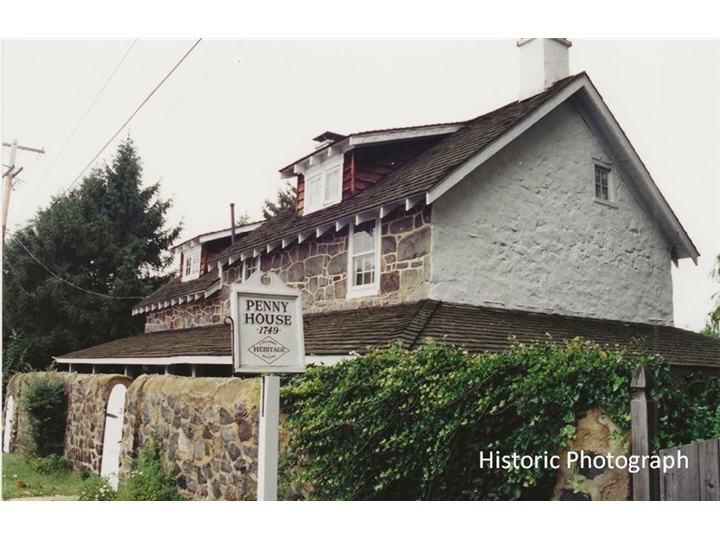 It is believed the Penny House history goes back to when this stone home was first built in 1749 by Arthur Penny. His sons David and William then worked as joiners (cabinet makers) in the house on the popular King's Highway which led north to Philadelphia. Well-known local artist, Robert Shaw (who had grown up in the porter's ledge with his family at nearby Rockwood) moved to the Penny House in 1881. It had been divided into 2 separate residences, each with its own fireplace and stairway. In the late 1940's, Annie Shaw sold it to the the Travis family, who later built many of the homes in Penny Acres and lived in the Penny Barn in back of the house. They converted it to one residence. It was later sold to James W. Bellah, an author of many Western stories which were later turned into films such as "She Wore a Yellow Ribbon."
Details such as the beaded beams in the main bedroom show the care that was taken to construct these utilitarian elements and create a graceful room with stone walls creating deep windows looking out on the grounds behind the house. The home was said to have been a toll stop on the Philadelphia Turnpike and became witness to the "W 3R Route" which took the Continental troops over 700 miles from Rhode Island to Yorktown, Virginia. The troops included both Lafayette and Washington (who is said to like to stop for its cool spring water). Probably in the 19th century, a thick stone wall was built to separate this peaceful retreat from the present day Philadelphia Pike.
Today this 3 bedroom home includes a large parlor with what was probably the cooking fireplace, a magnificent piece with some of the legends of the house's history mounted on a wooden plaque over it. At some point probably in the early 20th century, it had been covered over with wallboard and wallpaper. Moving up one of the 2 staircases, we find another beautiful room---the main bedroom on the 2nd level, with the original beaded wooden joists (probably created by the Penny family). Another staircase here leads up to the attic, complete with original rafters imprinted with Roman numerals used to aid in roof construction. The landscaped grounds include a springhouse, the former cow pond, a gazebo made from a Victorian bell tower, a former garage, potting shed, and an outbuilding once used as an antique shop. An album in the house contains many photographs filled with the antiques from that period. The house has been featured on Wilmington Garden Day.

Select a school from the following list. Schools are grouped by school type.
The schools on this list are selected by their proximity of up to 5 miles to the property address. Proximity does not guarantee enrollment eligibility. Please contact the school directly for more information on enrollment requirements.
* If there are more than 5 schools of any type within a close proximity, click on the button to see additional schools of that type near the search address.

This report is a detailed community overview for Wilmington (19809), Delaware.

The population of the community broken down by age group. The numbers at the top of each bar indicate the number of people in the age bracket below.

The Temperature chart displays average high and low values for January and July, and is designed to provide an indication of both seasonal and daily temperature variability. The Weather Risk Index indicates the calculated risk of each type of weather event occurring in the future. This risk is based on historical localized storm events and weather patterns. The national average for each type of weather event equals a score of 100, so a score of 200 would represent twice the risk as the national average, and a score of 50 would represent half the risk of the national average.

The Fair Market Rents show average gross rent estimates based on figures provided by the U.S. Department of Housing and Urban Development (HUD).

The data relating to real estate for sale on this website appears in part through the BRIGHT Internet Data Exchange program, a voluntary cooperative exchange of property listing data between licensed real estate brokerage firms in which Patterson-Schwartz Real Estate participates, and is provided by BRIGHT through a licensing agreement. The information provided by this website is for the personal, non-commercial use of consumers and may not be used for any purpose other than to identify prospective properties consumers may be interested in purchasing.
Information Deemed Reliable But Not Guaranteed.
Copyright BRIGHT, All Rights Reserved
Listing data as of 12/01/2021.

Homes for Sale Nearby